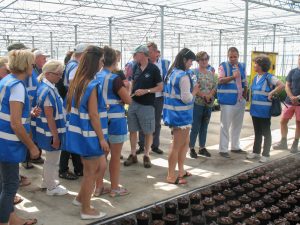 Polish visitors given a tour of Walberton’s new glasshouse

Association. The group were on a study tour to the South of England and were recommended a visit to members of the Farplants Group by Neville Stein. The group were greatly assisted on the day by Binsted Manager, Daria Pawlik, who, being from Poland, was able to help the group and our own Managers interact with one another and assist discussions. The group were given a tour of Walberton and Binsted Nurseries and the Farplants Finishing Centre by members of the Management Team, and were interested in all aspects of growing, asking questions around growing media, fertilisers, labelling and plants that were new to them.

As well as visiting Farplants Group members, the group visited many other ornamental nurseries in the surrounding area.